"We Do", also known as "The Stonecutters' Song" is a song from the animated television series The Simpsons, appearing in the season six episode "Homer the Great". It features the secret society of Stonecutters as they gloat about all of the conspiracies and secrets they are responsible for.

Who controls the British crown?
Who keeps the metric system down?
We do, we do!

Who leaves Atlantis off the maps?
Who keeps the Martians under wraps?
We do, we do!

Who holds back the electric car?
Who makes Steve Guttenberg a star?
We do, we do!

Who robs cavefish of their sight?
Who rigs every Oscar night?
We do!
We do! 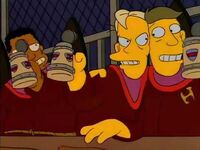 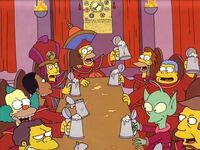 The Simpsons - We Do (Stonecutter's Song) (Video)
Episode

Retrieved from "https://villainsong.fandom.com/wiki/We_Do?oldid=16830"
Community content is available under CC-BY-SA unless otherwise noted.