Independent Song
"Thriller" is a song performed by late pop artist Micheal Jackson, detailing a monstrous creature called the Thriller. The song's music video shows the monster, disguised as Jackson, as it carries out its fiendish plans.

They're out to get you, there's demons closing in on every side
They will possess you, unless you change that number on your dial
Now is the time for you and I to cuddle close together, yeah
All through the night
I'll save you from the terror on the screen, I'll make you see

[The foulest stench is in the air
The funk of forty thousand years
And grizzly ghouls from every tomb
Are closing in to seal your doom
And though you fight to stay alive
Your body starts to shiver
For no mere mortal can resist
The evil of the thriller!] 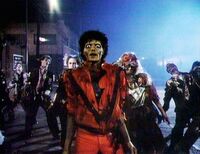 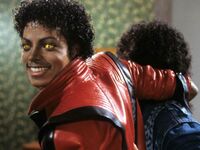 Thriller-2
TheRealSullyG
Add a photo to this gallery
Retrieved from "https://villainsong.fandom.com/wiki/Thriller?oldid=27996"
Community content is available under CC-BY-SA unless otherwise noted.