The Very Reason That I Live

The Very Reason That I Live

"The Very Reason That I Live" is a song from the episode "The Great Louse Detective" of the animated television series The Simpsons. It features Sideshow Bob singing to Bart about how plotting to kill him has become such an important part of his life that he can't kill him now. It is a parody of the song "I've Grown Accustomed to Her Face" from the musical My Fair Lady.

It was mainly performed by Bob's voice actor Kelsey Grammer, with a small intervention of Bart's voice actress Nancy Cartwright.

[Yeah, it's every parent's dream to outlive their children. Good night, son.]

[Now I'm going to take some advice that was given to me by Lenny, and kill you without doing. One thrust and the deed is done.]

I've grown accustomed to his face,

And dreams of gouging out his eyes.
I've grown accustomed to my hate
My plans to lacerate,
To disembowel,
To hear him howl.

The very reason that I live
Is plotting how to watch him die.

[Bart! Turn down that original cast recording and go to sleep!]

I know this chubby scalawag
Has made my life a living hell
Surely, if I drank his blood,
I'd be at peace...
But well...

You've grown accustomed to my face?

[We shall meet again, old friend. But now, I must steal away into the night.] 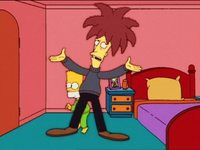 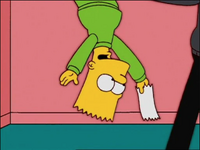 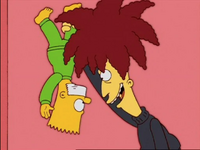 The Simpsons - The Very Reason That I Live
Album
Add a photo to this gallery
Retrieved from "https://villainsong.fandom.com/wiki/The_Very_Reason_That_I_Live?oldid=18306"
Community content is available under CC-BY-SA unless otherwise noted.