Cartoon Song
"The Skeleton Dance" is an instrumental song from the 1929 Disney animated Silly Symphonies short of the same name. It plays as Skeletons rise from their graves and dance through the night. 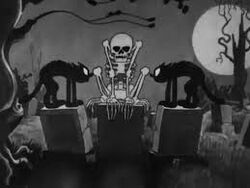