Cartoon Song
"The Real Ludmilla" is a song from the 1999 direct-to-video animated film Bartok the Magnificent. It features Ludmilla singing about her ambitions to power while slowly turning into an obese purple wingless dragon after drinking Bartok's potion.

It was performed by Ludmilla's voice actress Catherine O'Hara and a chorus as Ludmilla's prisoners.

Starting today they are going to welcome a new girl,
Starting today no more lying or sneaking about,
No! They'll see someone lovely as a flower!
Someone who is totally in power!
Starting today when the real Ludmilla comes out!

Oh yes! And starting today the whole world will be mine on a platter!
(Every man on a plate)
Kneel, you peasant, you peon, you dim-witted lout!
(Gee, the future looks great)

Now my inner beauty is appearing,
I can almost hear the peasants cheering! 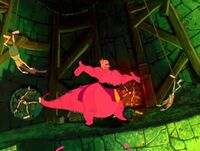 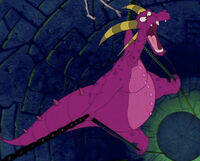 The Real Ludmilla (HQ)
Add a photo to this gallery
Retrieved from "https://villainsong.fandom.com/wiki/The_Real_Ludmilla?oldid=24917"
Community content is available under CC-BY-SA unless otherwise noted.