The Point of No Return

The Music of the Night

The Phantom of the Opera

"The Point of No Return" is a song from the stage musical The Phantom of the Opera, as well as its various other performances and 2004 film adaptation. It features the Phantom who, after killing actor Signor Piangi and usurping his role, sings with his love interest Christine Daaé on stage and attempts to propose to her until the crew finds Piangi's body backstage.

What raging fire shall flood the soul?
What rich desire unlocks its door?
What sweet seduction lies before us?

Past the point of no return
No going back now
Our passion-play has now, at last, begun
Past all thought of right or wrong
One final question
How long should we two wait, before we're one?
When will the blood begin to race?
The sleeping bud burst into bloom?
When will the flames, at last, consume us?

Say you'll share with me
One love, one lifetime
Lead me, save me from my solitude

Say you want me with you here beside you
Anywhere you go, let me go too
Christine, that's all I ask of-

[What is it? What has happened? Ubaldo!]

[Monsieur le Vicomte! Come with me!]

[You! Why did you let this happen?]

[Monsieur le Vicomte, I know where they are!]

[You must. But remember: your hand at the level of your eyes!] 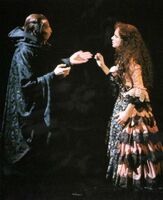 The Point of No Return-0
Giovanni Abbiati
Add a photo to this gallery
Retrieved from "https://villainsong.fandom.com/wiki/The_Point_of_No_Return?oldid=14179"
Community content is available under CC-BY-SA unless otherwise noted.