The Phony King of England

The Phony King of England

Movie Song
"The Phony King of England" is a song from Disney's 1973 animated film Robin Hood. It features Little John and the rest of Robin's friends and allies performing a song where they mock and criticize Prince John and his reign.

The song is later sung and hummed by the Sheriff of Nottingham and Sir Hiss.

It was performed by Little John's voice actor, the late Phil Harris, along with a chorus as the rest of the characters.

He sits alone on a giant throne
Pretendin' he's the king
A little tyke who's rather like
A puppet on a string
And he throws an angry tantrum
If he cannot have his way
And then he calls for his Mum
While he's suckin' his thumb
You see, he doesn't want to play

While he taxes us to pieces
And he robs us of our bread
King Richard's crown keeps slippin' down
Around that pointed head
Ah! But while there is a merry man
In Robin's wily pack
We'll find a way to make him pay
And steal our money back
A minute before he knows we're there
Ol' Rob'll snatch his underwear! 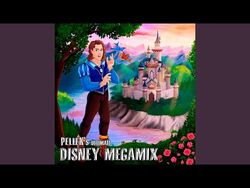 The Phony King of England (From "Robin Hood")
PelleK
Add a photo to this gallery
Retrieved from "https://villainsong.fandom.com/wiki/The_Phony_King_of_England?oldid=28045"
Community content is available under CC-BY-SA unless otherwise noted.