"The Neva Flows" is a song from the stage musical adaptation of the 1997 animated film Anastasia. It features the General Gleb Vaganov telling "Anya" about how his father was one of the soldiers that executed the Romanov family and warns her that her life could be in danger if she turns out to be the true lost princess Anastasia.

Could I have pulled the trigger if I had been told?

Be careful what a dream may bring


Revolution is a simple thing 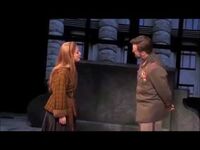 Retrieved from "https://villainsong.fandom.com/wiki/The_Neva_Flows?oldid=19668"
Community content is available under CC-BY-SA unless otherwise noted.