"The Monorail Song" is a song that appears in the season four episode "Marge vs. Monorail" of the animated television series The Simpsons. It features the con-artist Lyle Lanley as he dupes the citizens of Springfield into buying and constructing a monorail.

[You know, a town with money's a little like the mule with the spinning wheel. No one knows how he got it and danged if he knows how to use it.]

[The name's Lanley, Lyle Lanley. And I come before you good people tonight with an idea. Probably the greatest—Aw, it's not for you. It's more a Shelbyville idea.]

[Now, wait just a minute. We're twice as smart as the people of Shelbyville. Just tell us your idea and we'll vote for it.]

[All right. I'll tell you what I'll do. I'll show you my idea. I give you the Springfield Monorail! I've sold monorails to Brockway, Ogdenville, and North Haverbrook, and, by gum, it put them on the map! Well, sir, there's nothin' on Earth like a genuine bona-fide electrified six-car monorail!]

I hear those things are awfully loud
It glides as softly as a cloud
Is there a chance the track could bend?
Not on your life, my Hindu friend

What about us brain-dead slobs?
You'll be given cushy jobs
Were you sent here by the Devil?
No, good sir, I'm on the level

The ring came off my pudding can
Take my pen knife, my good man
I swear it's Springfield's only choice
Throw up your hands and raise your voice

But Main Street's still all cracked and broken
Sorry, Mom, the mob has spoken 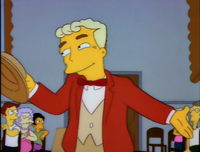 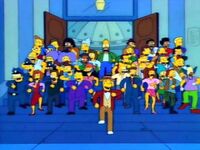 Retrieved from "https://villainsong.fandom.com/wiki/The_Monorail_Song?oldid=18300"
Community content is available under CC-BY-SA unless otherwise noted.