"The Firebird Suite" is a suite composed by Igor Stravinsky. The original story of the composition tells the story of Prince Ivan's adventures, who is helped by the titular Firebird after sparing her life during their first meeting. The 1911 original and the 1945 versions were written by Stravinsky, while the 1919 version was written by Ernest Ansermet.

The composition has been used in a more villainous ways since then. In the ballet, the "Infernal Dance" segment (which originally featured the Firebird saving Ivan from Koschei's minions) has been used in two animated films: 1976 Italian film Allegro non Troppo and 1999 Disney animated film Fantasia 2000.

In Allegro non Troppo, the suite accompanies an animated segment that reimagines the Biblical story of Adam and Eve, with the serpent failing to convince them to eat the apple from the Tree of Good and Evil, so he decides to eat it instead. This causes a group of demons to trap the serpent and torture him, showing some of the elements that corrupt the souls of humans (sex, drugs, greed, violence, etc.) while slowly anthropomorphize him giving him arms, legs and clothes. The serpent escapes and spits out the apple, getting rid of the clothes and arms and legs. He then jumps to the live action stage of the movie causing panic on the orchestra members.

Fantasia 2000 features a benevolent being called the Spring Sprite who, accompanied by an elk, starts to bring back the flowers and trees of a forest after winter. During such process she finds a curious volcanic tree inside of a volcano crater where her powers don't work, she touches it awakening the Firebird (who in this version is an hostile and destructive being of fire and lava) who attacks her and destroys the forest. After the attack the Elk finds the Spring Sprite weakened and gives her a ride on it's horns, seeing the destruction of the forest the Sprite begins to cry, but then realizes that her tears are bringing back the life to the forest, she ends turning into a rain being and manages to bring back the life to the entire forest, including the previous volcano. 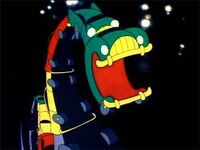 Retrieved from "https://villainsong.fandom.com/wiki/The_Firebird_Suite?oldid=23191"
Community content is available under CC-BY-SA unless otherwise noted.