The Daughter of Evil

The Daughter of Evil

"The Daughter of Evil" (悪ノ娘, Aku no Musume), also known as "The Daughter of Lucifer", is a song produced by mothy (formerly known as Akuno-P) and performed by VOCALOID Rin Kagamine. It is the first song in the "Story of Evil" series (later expanded into the multimedia franchise The Evillious Chronicles) and the third song in the "Seven Deadly Sins" series. It tells the story of the tyrannical rule and fall of Riliane Lucifen d'Autriche, an evil princess ruling over her country of Lucifenia.

Long, long, time ago in some place was
The kingdom of treacherous inhumanity,
And there reign in apex was
The princess of age fourteen

Gorgeous luxurious furniture.
The servant who had quite a similar face.
Name of beloved horse was Josephine.
Everything was all hers.

If the money lacks,
Squeeze out from the foolish raff.
As for the people who oppose to me,
Clean up.

Evil flowers steadily bloom
With vivid coloration.
As for pitiful weeds around,
Ah, become nutrients and now decay off.

The tyrant princess's love was a
Man of blue on the other side of the sea.
However, as for him the neighboring country's
Woman of green was love at first sight.
The princess, mad with envy,

One day calls up her minister
And said it in a quiet voice,
"Ruin the country of green."

Numerous houses burned down.
Numerous lives were going out.
The grief of the suffering people,
Does not reach the princess.

Evil flowers steadily bloom
In maniacal coloration.
Although it is a very beautiful flower,
Ah, there's too many thorns it can't be touched.

In order to defeat the evil princess
The people finally stand up.
Leading the crowd no more than a bevy of birds was a
Lady swordsman of red armor.

The anger that had piled and piled,
Now wrapped the entire country.
Worn from long war,
The soldiers were not an enemy at all.

Finally the court was surround and
Servants too, ran away.
The lovely, dainty princess,
Finally was caught

[How disrespectful a man!]

Evil flowers steadily bloom
In doleful coloration.
The paradise made for her
Ah, collapseing brittle and fleetingly.

Long, long time ago in some place was
The kingdom of treacherous inhumanity.
And there reign in apex had been
The princess of age fourteen

Time of execution was three o'clock in the afternoon,
The time when the bell of the church sounds.
The person who was called the princess,
What thought does she have alone in prison

Finally, the time arrives
The bell which announces the end rings.
Not giving any eyes to the populace,
She said this:

Evil flowers steadily bloom
In vivid coloration.
The people of latter-day talk of her as such,
Ah, she was truly the daughter of evil. 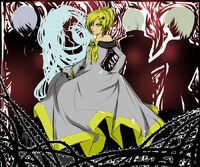 Retrieved from "https://villainsong.fandom.com/wiki/The_Daughter_of_Evil?oldid=18581"
Community content is available under CC-BY-SA unless otherwise noted.