Theatrical Song
"The Bottom Line (Reprise)" is a song from the Disney Broadway musical and film Newsies. It features the main antagonist Joseph Pulitzer shaming and gloating to protagonist Jack.

Time's running out, kid
So what do you say?
Cowboy or convict
I win either way
Your abject surrender
Was always the bottom line

[Gentlemen, escort our guest to the cellar so he might reflect in solitude]

Like the Pied Piper you knew what to play

'Till those kids all believed you were right

Lucky for them all but one got away

They may not be so lucky tonight... 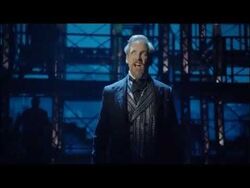 The Bottom Line (Reprise)
Add a photo to this gallery

Retrieved from "https://villainsong.fandom.com/wiki/The_Bottom_Line_(Reprise)?oldid=27901"
Community content is available under CC-BY-SA unless otherwise noted.