"The Bottom Line" is a song from the Disney Broadway musical and film Newsies. It about the main antagonist Joseph Pulitzer singing about how to sell more newspapers and creating the conflict throughout the show.

It was performed by John Dossett as Joseph Pulitzer.

[Gentlemen, we need to sell more papers. There's an answer right before your eyes, but you're just not thinking this through]

​Nunzio knows, when
He's cutting my hair
Trim a bit here and then
Trim a bit there
Just a modest adjustment
Can fatten the bottom line

​[What if we cut back personnel?]

[We could lower the price of the paper]

[Bankrupting me even faster! Let me try again]

[I've got it! If we charge the newsies sixty cents per hundred instead of fifty-]

[My thought exactly. It's genius]

[It's gonna be awfully rough on those children]

[Nonsense, they'll be learning a real life lesson in economics. I couldn't offer them a better education if they were my own]

Give me a week and I'll train them to be
Like an army that's marching to war
Proud of themselves and so grateful to me
They'll be begging to pay even more!
When there's dirt on our shoes, boys
For God's sake, relax!
Why throw them out?
All we need is some wax
Listen well to these barbershop lessons
For they'll see you through

And the power of the press
Yes! Once again is mine!
The price for the newsies goes up in the morning!
Just a few common cents
Gents, that's the bottom line!

Every new outcome
It's income for you
Thanks to that bottom line! 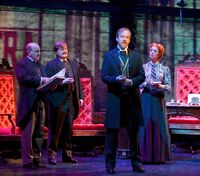 Retrieved from "https://villainsong.fandom.com/wiki/The_Bottom_Line?oldid=20577"
Community content is available under CC-BY-SA unless otherwise noted.