"Somethin' Stupid" also known as "Something Stupid" is a 1966 song originally performed by the music duo and married couple C. Carson and Gaile Parks, better known as Carson and Gaile. While not originally villainous, it appeared later on the season three episode "Black Widower" from the animated television series The Simpsons in a karaoke song performed by Sideshow Bob and Selma Bouvier before their wedding.

I know I stand in line,
Until you think you have the time
To spend an evening with me

And if we go someplace to dance,
I know that there's a chance
You won't be leaving with me

And afterward, we drop into a quiet little place
And have a drink or two.

And then I go and spoil it all,
By saying something stupid
Like: "I love you." 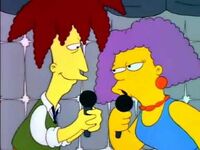 Retrieved from "https://villainsong.fandom.com/wiki/Somethin%27_Stupid?oldid=20448"
Community content is available under CC-BY-SA unless otherwise noted.