"Slaughter Your World" is a dark parody of the song "Part of that World" from The Little Mermaid. The song comes from the perspective of Richard the Warlock as he sings of his love of killing and his desires to kill practically everything in the world for his own entertainment.

Excitement's about, I almost can't wait
Relax, I don't want your baby, I already ate
Thought I do tend to generally kill,
Kill things that don't fight back.

I see this village, what does it hold?
What should I butcher with, fire or cold?
Running from me, sure you'd think:

He's a pathological, bloodthirsty, homicidal maniac
I kill kittens, and puppies and bunnies.
I maim toddlers and teens and then more

You see a wife, I see a widow
But what then, can't you see, I kill for

I want to incinerate and decapitate
I want to melt, want to melt some faces
Watching the peasants... oh what do they call it... ah, grieve.

I suppose that being undead, there is not much to life
A soul is needed for loving and feeling
How does this all not make me... ah what's the word again... heave?

You've nowhere to hide, nowhere to run
Your village will burn like the heart of the sun
With infinite glee, it's going to be me, that slaughters the world

How could I glare, into these eyes and then not stab them
How could I stare at their loss and then not laugh
I cut them in half, then I graft his head back onto his shoulders
Or after I lop it, I make a puppet, on top of a staff

I am a lord that is sometimes bored
Have some urges and need to fulfill them
After my mayhem I simply don't.... what's the word... care

The stench in the air, the smell of the gore,
the carnage far greater than any war
My legacy, death becomes me, I'll slaughter the world. 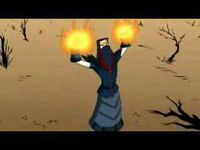 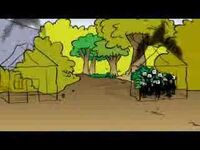 Villagers after burning the second house.
Add a photo to this gallery

Looking For Group Slaughter Your World
Add a photo to this gallery
Retrieved from "https://villainsong.fandom.com/wiki/Slaughter_Your_World?oldid=10811"
Community content is available under CC-BY-SA unless otherwise noted.