Sirens of the Sea

Sirens of the Sea

Sirens of the Sea is a song from the 2009 LAIKA stop-motion animated film Coraline, based off the 2002 novel of the same name by Neil Gaiman. It features the Other Spink and Other Forcible singing to protagonist Coraline during a deceptive performance.

The song was performed by Other Spink and Other Forcible's voice actresses Jennifer Saunders and Dawn French respectively.

Oh! Beware of old oysters too large in the chest
Let's banish them from the buffet
I'm far more nutritious

Did I hear a banshee?

You're sea-green with envy!
This mermaid enchantress- 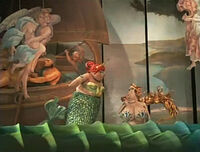 Coraline (2009) The Theatre
Add a photo to this gallery
Retrieved from "https://villainsong.fandom.com/wiki/Sirens_of_the_Sea?oldid=6355"
Community content is available under CC-BY-SA unless otherwise noted.