Once Upon a Halloween

Cartoon Song
"Sidekicks and Henchmen" is a song from Disney's 2005 direct-to-video animated film Once Upon a Halloween. It features the talking magical cauldron that assists Queen Grimhilde in her plot to conquer Halloween showing to her various of the Disney villains henchmen along with a song about why are they helpful.

It was performed by Pat Carroll who is more known for being Ursula's voice actress.

Sidekicks and henchmen
That's who get you the prize
They'll be your ears and eyes
If ever trample through, arise! 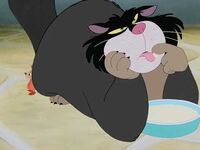 Retrieved from "https://villainsong.fandom.com/wiki/Sidekicks_and_Henchmen?oldid=21330"
Community content is available under CC-BY-SA unless otherwise noted.