"See My Vest" is a song from the season six episode "Two Dozen and One Greyhounds" from the animated television series The Simpsons. It features Mr. Burns singing about his love of fur clothes and his plan to make a tuxedo with the puppies of the Simpson family. The song is a parody of "Be Our Guest" from Disney's 1991 animated film Beauty and the Beast.

It was performed by Mr. Burns' voice actor Harry Shearer, with a brief line from a maid voiced by Tress MacNeille.

Some men hunt for sport,
Others hunt for food,
The only thing I'm hunting for,
Is an outfit that looks good...

See my vest, see my vest,
Made from real gorilla chest,
Feel this sweater, there's no better
Than authentic Irish setter.

Grizzly bear underwear,
Turtles' necks, I've got my share,
Beret of poodle, on my noodle
It shall rest.

Like my loafers? Former gophers -
It was that or skin my chauffeurs,
But a greyhound fur tuxedo
Would be best,

So let's prepare these dogs,
(Kill two for matching clogs!)
See my vest, see my vest,
Oh please, won't you see my vest! 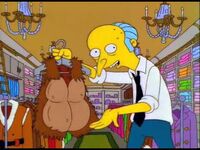 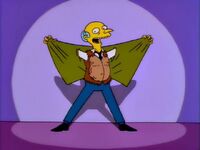 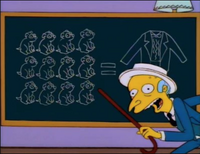 See My Vest! (The Simpsons)
Episode

The Simpsons - See My Vest
Album

See My Vest
Hit & Run Bluegrass
Add a photo to this gallery
Retrieved from "https://villainsong.fandom.com/wiki/See_My_Vest?oldid=18304"
Community content is available under CC-BY-SA unless otherwise noted.