Movie Song
"Scrooge" is from the Muppets' adaptation of The Christmas Carol. It features the muppets singing about ruthlessness and selfishness of the titular character.

It paints you with indifference
Like a lady paints with rouge

The most hated and cursed

Is the one that we call Scrooge
[yeah]

And the wrath of many

This is Ebenezer Scrooge

If he became a flavor, you can bet he would be sour
[yuck!]

The undisputed master of the underhanded deed

He charges folks a fortune for his dark and drafty houses

Us poor folk live in misery

It's even worse for mouses
[Please sir, I want some cheese]

He must be so lonely
He must be so sad
He goes to extremes to convince us he's bad
He's really a victim of fear and of pride
Look close and there must be a sweet man inside...

He has no time for friends or fun

Don't ask him for a favor cause his nastiness increases

No crust of bread for those in need

No cheeses for us meeces

He never gives
He only takes
He lets his hunger rule

If being mean's a way of life
You practice and rehearse

Then all that work is payin' off

Cause Scrooge is getting worse

Every day, in every way
Scrooge is getting worse! 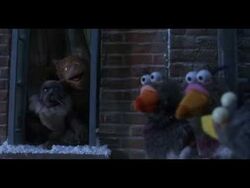 Scrooge
Soundtrack
Add a photo to this gallery
Retrieved from "https://villainsong.fandom.com/wiki/Scrooge?oldid=24537"
Community content is available under CC-BY-SA unless otherwise noted.