The "Salesmunz Rap", also known as the "Stuff-Mart Rap", is a song from the 1998 animated short film VeggieTales: Madame Blueberry. It features the Scallions as they convince Madame Blueberry that she needs to buy more things from their store, Stuff-Mart.

The song was performed by the Scallions' voice actors and series creators Phil Vischer and Mike Nawrocki.

And if you need refrigerators to keep extra mashed potatoes,
Or a giant air compressor to blow fruit flies off your dresser,
Or a dehydrated strudel, or a nose ring for your poodle,
Or a five pound can of tuna and some flippers to go scuba!

If you need a rubber hose
(We got those!)
A rhododendron tree
(We got three!)
A wrap-around deck
(Gotta check.)

But if you need a window scraper and a gross of toilet paper,
Or a rachet set and pliers, and surround sound amplifiers,
and a solar turkey chopper, Or a padded gopher bopper,
Flannel shirts for looking grungy and some rope for goin' bungee!

What we've mentioned are only just some
Of the wonderful things yet to come.
These pictures you keep are so... nice.
But you really should take our advice.

Happiness waits at the Stuff-Mart!
All you need is lots more stuff.

You really, really ought to.

How could I afford not to?

Happiness waits at the Stuff-Mart! 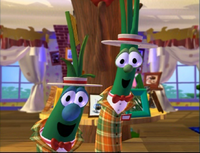 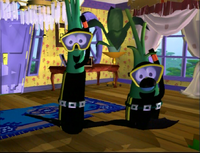 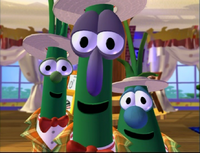 Salesmunz Rap
Add a photo to this gallery

Retrieved from "https://villainsong.fandom.com/wiki/Salesmunz_Rap?oldid=26947"
Community content is available under CC-BY-SA unless otherwise noted.