Run is a song from the 2000 rhythm video game The Jungle Book Groove Party. It is sung by Shere Khan as he attacks Mowgli and the Vultures urging Mowgli to run.

The song was performed by Shere Khan's voice actor, the late Tony Jay, and a chorus as the Vultures.

Do you know who you are facing?
Do you know just who I am?
Prepare to meet your last defeat
In the paws of Shere Khan

Enjoy the moment, mancub...
You won't live to be a man
Run.

Run!
While you have a chance!
Run, friend, run!

This is your last dance

You humans are all the same
On the world, you think you reign
But now, the hunter is the hunted
As you've become my game

Take a deep breath, my friend,
As you are near the end... 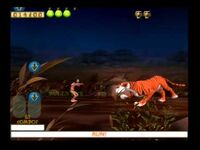 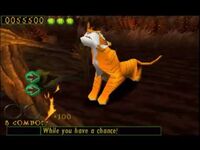 Run, with lyrics, Jungle Book Groove Party
Soundtrack
Add a photo to this gallery
Retrieved from "https://villainsong.fandom.com/wiki/Run?oldid=6346"
Community content is available under CC-BY-SA unless otherwise noted.