"Reviewing the Situation" is a song featured in the stage musical Oliver! and its 1968 film adaptation of the same name. It features Fagin who, after being threatened by Bill Sikes, starts to consider whether or not a life of crime is all it is cracked up to be and throughout the song he assesses all his options.

A man's got a heart, hasn't he?
Joking apart - hasn't he?
And tho' I'd be the first one to say that I wasn't a saint,
I'm finding it hard to be really as black as they paint...

...I think I'd better think it out again!

A wife you can keep, anyway,
I'd rather sleep, anyway.
Left without anyone in the world,
And I'm starting from now.
So "how to win friends and to influence people"
--So how?

I'm reviewing the situation,
I must quickly look up everyone I know.
Titled people - with a station -
Who can help me make a real impressive show!
I will own a suite at Claridges,
And run a fleet of carriages,
And wave at all the duchesses
With friendliness, as much as is
Befitting of my new estate...

[Good morrow to you, magistrate!]

...I think I'd better think it out again.

So where shall I go - somebody?
Who do I know? Nobody!
All my dearest companions
Have always been villains and thieves...
So at my time of life
I should start turning over new leaves...?

I'm reviewing the situation.
If you want to eat - you've got to earn a bob!
Is it such a humiliation
For a robber to perform an honest job?
So a job I'm getting, possibly,
I wonder who my boss'll be?
I wonder if he'll take to me...?
What bonuses he'll make to me...?
I'll start at eight and finish late,
At normal rate, and all... but wait!

...I think I'd better think it out again.

What happens when I'm seventy?
Must come a time...seventy.
When you're old, and it's cold
And who cares if you live or you die,
Your one consolation's the money
You may have put by...

I'm reviewing the situation.
I'm a bad 'un and a bad 'un I shall stay!
You'll be seeing no transformation,
But it's wrong to be a rogue in every way.

I don't want nobody hurt for me,
Or made to do the dirt for me.
This rotten life is not for me.
It's getting far too hot for me.
There is no in between for me
But who will change the scene for me?
Don't want no one to rob for me.
But who will find a job for me

...I think I'd better think it out again! 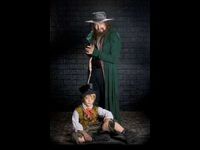 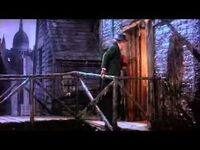 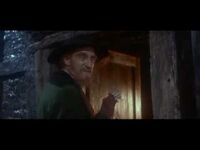 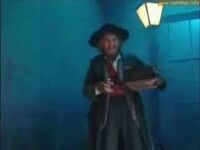 Reviewing The Situation (From "Songs From Oliver")
Victor Spinetti

Reviewing The Situation
Murray Ross
Add a photo to this gallery

Retrieved from "https://villainsong.fandom.com/wiki/Reviewing_the_Situation?oldid=13460"
Community content is available under CC-BY-SA unless otherwise noted.