"Regret Message" (リグレットメッセージ, Riguretto Messeeji), also known as "Fallen Angel", is a song produced by mothy (formerly known as Akuno-P) and performed by VOCALOID Rin Kagamine. It is the third song in the "Story of Evil" series (later expanded into the multimedia franchise The Evillious Chronicles). It details the remorse and sorrow Riliane Lucifen d'Autriche feels after the death of her brother Allen Avadonia, which she is responsible for.

In a little port on the outskirts of town, a young girl stands alone
By this sea, there existed an old tradition from before.

"Write your wish on a piece of parchment and place it in a little bottle.
If you let it flow with the sea, someday your wish will come true."

Flow along, little glass bottle
With a message containing a wish.
On the other side of the horizon, there, it quietly disappears.

You always did everything for my sake. All that I wanted, and yet
I was always so selfish and troublesome to you.

You, who grant my wishes, is no longer here.
Will my thoughts, on this sea arrive at their destination?

Flow along, little wish
Tears and a little bit of regret.
When I had realized my sins, it was always after everything was already over.

Flow along, little glass bottle
With a message containing a wish.
On the other side of the horizon, there, it quietly disappears.

Flow along, little wish
Tears and a little bit of regret. 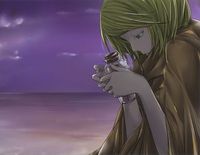 Retrieved from "https://villainsong.fandom.com/wiki/Regret_Message?oldid=18583"
Community content is available under CC-BY-SA unless otherwise noted.