Ready As I'll Ever Be

Ready As I'll Ever Be

Cartoon Song
"Ready As I'll Ever Be" is a song from the season one finale "Secret of the Sun Drop" of the Disney animated television series Tangled: The Series (later known as Rapunzel's Tangled Adventure). It features Varian as he finalizes his plans, with Cassandra, Eugene, Rapunzel, Pete, Stan, and King Frederic preparing for battle.

[Any moment now, Your Highness.]

I'm the bad guy — that's fine:
It's no fault of mine
And some justice at last will be served.

Now it's time to rise up
Or it's time to stand down,
And the answer is easy to see;
And I swear by this sword,
If you're in, get on board!
Are you ready?

Ready as I'll ever be!

Are you quite sure we can do this?
Together we will, guarantee!

I'll make them hear me!

Prove they can trust me!

...And the outcome will hardly come free.

I'll save my home and family!

Now the line's in the sand
And our moment's at hand...

Ready As I’ll Be - female ver. (Tangled The Series) 【covered by Anna】
Annapantsu 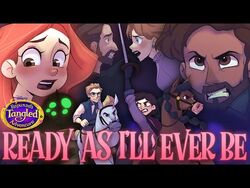