"Razzle Dazzle" is a song featured in the 1975 Broadway musical Chicago and its 2002 film adaptation of the same name. It features Billy Flynn, the corrupt lawyer Roxie Hart, as he attempts to turn her trial into a media circus.

(Give 'em the old double-whammy)
(Daze and dizzy 'em)
Back since the days of old Methuselah
Everyone loves the big bamboozler
(Give 'em the old three-ring circus)
(Stun and stagger 'em)
When you're in trouble, go into your dance
Though you are stiffer than a girder
They'll let you get away
(with murder)
Razzle dazzle 'em and you've got a romance 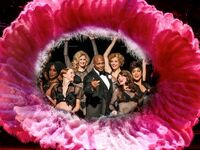 Razzle Dazzle - Sound-a-like Cover
From: Chicago
Add a photo to this gallery
Retrieved from "https://villainsong.fandom.com/wiki/Razzle_Dazzle?oldid=18060"
Community content is available under CC-BY-SA unless otherwise noted.