Movie Song
"Pink Elephants on Parade" is a song sung about the Pink Elephants in Disney's 1941 animated film Dumbo. After protagonists Dumbo and Timothy Mouse get drunk, they hallucinate about the nightmarish Pink Elephants. The song was performed by The Sportsmen.

In 2019, Disney remade Dumbo as a live-action film. "Pink Elephants on Parade" was included as an instrumental theme, featuring bubble-blowers creating the Pink Elephants during their performance in the circus. This version was composed and performed by Danny Elfman.

Look out! Look out!
Pink elephants on parade.
Here they come!
Hippety hoppety.

They're here, and there.
Pink elephants everywhere!

Look out! Look out!
They're walking around the bed.
On their head!
Clippety cloppety.

I could stand the sight of worms
And look at microscopic germs
But technicolor pachyderms
Is really too much for me!

I am not the type to faint
When things are odd or things
are quaint
But seeing things you know that ain't
Can certainly give you an awful fright!
What a sight!

They're here!
They're there!
Oh no! Look out!
They're everywhere! 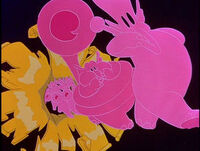 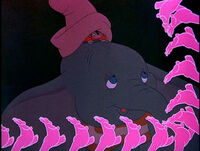 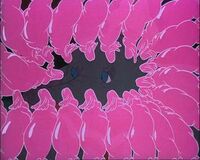 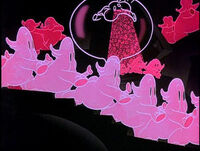 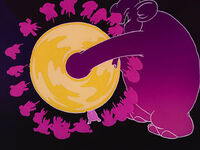 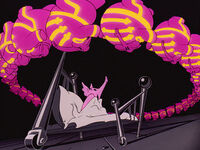 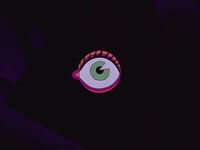 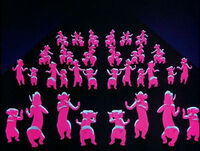 Retrieved from "https://villainsong.fandom.com/wiki/Pink_Elephants_on_Parade?oldid=24017"
Community content is available under CC-BY-SA unless otherwise noted.