"Orders 1-65" is a song based on the Star Wars franchise from the adult stop-motion parody television series Robot Chicken. It features Emperor Palpatine singing about all his plans to Darth Vader. The song is a parody of the American folk song "Turkey in the Straw"

It was performed by Seth Macfarlane as the Emperor.

Oooooh
Capture me a Wookie,
Kick a princess in the cookie
Sabotage the espionage of a Bothan spy
Activate the trash compactor
Let's protect the main reactor
Stab a smuggler in the jugular and watch him die
Corrupt a teen from Tatooine
Manipulate a Gungan and
Kill the Naboo's queen
Trap a Mon Calamari
Take a Tauntaun on safari
Hit a topless bar on Mustafar with artist Ralph McQuarrie

[You know what, I'll just email you a PDF or something] 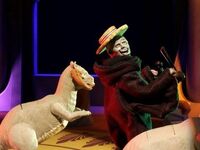 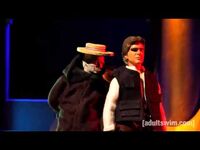 Orders 1-65 Robot Chicken Adult Swim
Add a photo to this gallery
Retrieved from "https://villainsong.fandom.com/wiki/Orders_1-65?oldid=18133"
Community content is available under CC-BY-SA unless otherwise noted.