The Santa Clause 3: The Escape Clause

"North Pole, North Pole" is a song from the 2006 live-action Disney squeal The Santa Clause 3: The Escape Clause. It features Jack Frost performing to a crowd after taking over the North Pole from Santa Claus. The song is a parody of the song "New York, New York", which was the theme of the 1977 film of the same name.

The song was performed by Jack Frost's actor Martin Short.

Start spreading the news
By jet or by sleigh
You wanna be a part of it
North Pole, North Pole.

You snooze and you lose
So come here to play
Here at the very heart of it
North Pole, North Pole

Come see the snowman up where no man's without a treat
And watch this King of the Chill
Turn up the heat.

If you can
Make it here the world's all
Christmas cheer 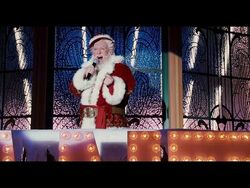