The "Main Title (Theme From Jaws)", also known as just the "Main Title" or the "Jaws Theme", is the main instrumental theme from the Jaws horror film franchise. It serves as the theme of the Great White Sharks when they appear. 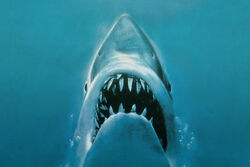 Retrieved from "https://villainsong.fandom.com/wiki/Main_Title_(Jaws)?oldid=23166"
Community content is available under CC-BY-SA unless otherwise noted.