"Let It Lie" is a song from the movie Smallfoot. It's sung by the Stonekeepper. Waring Migo about the small foots and what are they capable of.

It was performed by Stonekepper's voice actor Common along with a chorus.

[Um where are you takin' me?]
[So many questions]
[I think it's about time I give you some answers]
[What is this?]
[You see, Migo]

There was a time when Yetis lived beneath the clouds
We were alive and we were thriving till we came across a crowd
Of Smallfoot, that's right, we used to live down there
But there were actions we could not forgive down there
And though they used a different nomenclature
Man, or human, they showed us human nature
A dangerous species that we approached with wonder
They attacked with spears and their smokin' sticks of thunder
They called us Sasquatch, they called us abominable
They chased us, pursed us, their persistence indomitable
We had no choice but to run and hide
Otherwise, we surmised we were facin' genocide
So we climbed this mountain just to stay alive
You see we knew that up here Smallfoot cannot survive
So it was here the first law was written in stone
It was named and proclaimed as a truth to be known
Our world is an island, it floats on a sea of endless clouds
That's how we would be
And then we wrote more laws, more rules to obey
For the sake of us all it was the only way
To protect us from all of the human ravages
Heaped upon us by those human savages

[Wait, we're below the clouds]
[Or so it would seem]
[But look closer]
[Those aren't clouds, it's steam]
[The stones are working]
[The stones?]

[Wait so, so none of those stones are true, they're all lies]
[Now you know, now you know]
[Good lies to protect our world]
[But they need to know the truth]
[Oh do they?]

You feel emboldened by your noble quest to find the truth
I chalk it up to the naive innocense of youth
So let me share a secret that you'll learn as you grow older
What's true or not true is in the eye of the beholder
So do you wanna prevent our own annihilation?
[Yes!]
Then our only goal should be to control the flow of information
Unless you wanna see the Smallfoot conquer and pillage
[No!]
Then protect the lie and you protect the village

[Lives are at stake Migo]
[Your friends, your father, Meechee]
[She's curious and you know what they say]
[Curiosity killed the yak]
[So what do you want me to do?]
[Tell everyone you were lying about the smallfoot]
[But they've already seen it, they're not gonna believe me]
[You'll be surprised at what they'll believe]
[You think knowledge is power Migo] 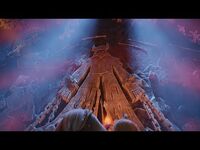 Let it Lie - Common (SMALLFOOT SOUNDTRACK)
Soundtrack
Add a photo to this gallery
Retrieved from "https://villainsong.fandom.com/wiki/Let_It_Lie?oldid=24639"
Community content is available under CC-BY-SA unless otherwise noted.