"Les Poissons" ("The Fish") is a song from Disney's 1989 animated film The Little Mermaid. It features Chef Louis singing about his love of cooking fish and other sea animals while Sebastian looks horrified and tries to escape the kitchen unnoticed.

It was performed by Chef Louis' voice actor, the late René Auberjonois.

First I cut off their heads
Then I pull out their bones.
Ah mais oui, ça c'est toujours délice.

Les poissons, les poissons
Hee-hee-hee, hon-hon-hon
With a cleaver I hack them in two.

I pull out what's inside
And I serve it up fried.
God, I love little fishes, don't you?

Here's something for tempting the palate
Prepared in the classic technique.
First you pound the fish flat with a mallet.

Then you slash off their skin.
Give their belly a slice.
Then you rub some salt in
'Cause that makes it taste nice.

[Zut alors! I have missed one!]

Sacrebleu! What is this?
How on earth could I miss
Such a sweet little succulent crab?

Quel dommage, what a loss!
Here we go in the sauce.
Now some flour-I think just a dab.

Now I stuff you with bread.
It don't hurt, 'cause you're dead
And you're certainly lucky you are.

'Cause it's gonna be hot
In my big silver pot
Tootle-loo, mon poisson, au revoir!

I'll give you a demonstration,
of my special preparation!

Set zem out on a dish,
Rip zair skin with a knife,
chop zair huh? 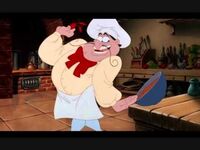