The Nightmare Before Christmas

Cartoon Song
"Kidnap the Sandy Claws" is a song sung by Lock, Shock and Barrel in Disney/Tim Burton's 1993 stop-motion animated film The Nightmare Before Christmas. It features the trio plotting to kidnap Santa Claus and deliver him to their master, Oogie Boogie.

Jack said we should work together
Three of a kind

Birds of a feather
Now and forever!

Kidnap the Sandy Claws, lock him up real tight
Throw away the key and then
Turn off all the lights

First, we're going to set some bait
Inside a nasty trap and wait
When he comes a-sniffing we will
Snap the trap and close the gate

Wait! I've got a better plan
To catch this big red lobster man
Let's pop him in a boiling pot
And when he's done we'll butter him up

Then Mr. Oogie Boogie man
Can take the whole thing over then
He'll be so pleased, I do declare
That he will cook him rare

I say that we take a cannon
Aim it at his door and then
Knock three times and when he answers
Sandy Claws will be no more!

You're so stupid, think now
If we blow him up to smithereens
We may lose some pieces
And then Jack will beat us black and green

Because Mr. Oogie Boogie is the meanest guy around
If I were on his Boogie list, I'd get out of town

He'll be so pleased by our success
That he'll reward us too, I bet

I wish my cohorts weren't so dumb

I'm not the dumb one

I've got something, listen now
This one is real good, you'll see
We'll send a present to his door
Upon there'll be a note to read
Now, in the box we'll wait and hide

Until his curiosity
Entices him to look inside
And then we'll have him
One, two, three

Kidnap the Sandy Claws, beat him with a stick
Lock him up for ninety years, see what makes him tick

The Nightmare Before Christmas - Kidnap the Sandy Claws HQ 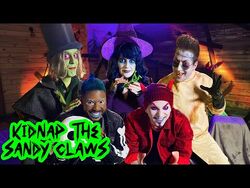 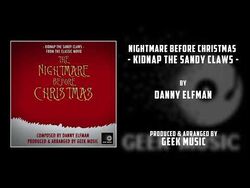