"Jingle Bells (Batman Smells)" is a comedic novelty song and parody of the song "Jingle Bells" (originally known as "One Horse Open Sleigh"), written by the late James Lord Pierpont in 1857. The novelty parody circulated since the 1960s, and has been referenced in many forms of media, including being sung by the Joker in the season one episode "Christmas with the Joker" of Batman: The Animated Series.

Dashing through the snow
In a one-horse sloping sleigh
Joker’s on the go,
laughing all the way
The bells on Penguins ring
Make Riddler wanna fight
Two-Face wants to flip a coin
And sing this song tonight

Jingle bells, Batman smells
Robin laid an egg
Batmobile lost a wheel
And Joker got away 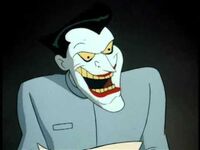 Retrieved from "https://villainsong.fandom.com/wiki/Jingle_Bells_(Batman_Smells)?oldid=17110"
Community content is available under CC-BY-SA unless otherwise noted.