It Feels So Good to Be Bad

It Feels So Good To Be Bad

All Dogs Go to Heaven 2

Cartoon Song
It Feels So Good to Be Bad is a song from the 1996 animated film, All Dogs Go to Heaven 2. It features Red gloating about how great it feels to be evil as he explains his wicked plans to Carface Carruthers.

The song was performed by Red and Carface's respective voice actors, George Hearn and the late Ernest Borgnine.

Now I know you've been malicious
Spiteful and a trifle vicious
It's no secret that you cheated and you've lied
And you've done some double dealing
Scheming, swindling, and stealing
You're an amateur, but heaven knows, you've tried

[Good boy. And very soon you're efforts will be rewarded]

You'll develop so much faster
Now you're working with a master
Who will help you cultivate your darker side
You'll discover wicked ways you've never known before
And you'll find that when you're really rotten to the core...

Charlie doesn't know it, but he's in my power!
He's gonna wish that he was never born!
I promise you that by the sunset hour
I'll have Gabriel's Horn!

Cause you had your chance and you blew it
I entrusted you to do it
But you bungled it and threw your chance away
It's a problem you created
If the horn can't be located
I'm not naming names, but someone has to pay!

[Try again boss!]
[You'll never find it. Only angels can give it's heavenly tone.]

[Not anymore. You work for me now.]

Though you gave me cause to doubt you
There's a loathsomeness about you
That attracts me to you as a protégé
And when you've learned every creepy crummy thing I know
You'll taste the joy that comes when you're the lowest of the low!

It feels so good to be bad
So delightful to be a deplorable cad
It's so appealing to have the feeling
That what you're doing gets trouble brewing
And drives everybody mad!

You've got my guarantee
It feels so good to be bad 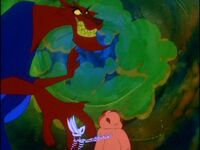 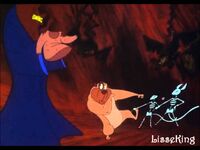 All Dogs Go To Heaven 2 - It Feels So Good to Be Bad
Add a photo to this gallery
Retrieved from "https://villainsong.fandom.com/wiki/It_Feels_So_Good_to_Be_Bad?oldid=24767"
Community content is available under CC-BY-SA unless otherwise noted.