"Intelligence" is a song from the Danish animated film Help! I'm a Fish. It features Joe as he persuades other fish to take the potion he stole from Professor Mac Krill to become intelligent.

The original Danish version of the song was performed by Joe's voice actor, Nis Bank-Nikkelsen, and in the English dub, the late Alan Rickman, and a chorus as the other fish.

One there was only silence, and not a speck of hope in sight
And every tiny bubble burst on its journey to the light

But the spark of creation will flicker again
It's a brand new era, about to begin.

Now, we've been caught, we've been sold, and left out in the cold
Evolution's been passing us by

But with this potion in hand, we've been given the chance
It's time to turn the tide

Come join me and seize this opportunity,
Alter your destiny,
One single drop will be enough to put you on top

Intelligence, say you'll lead the way
Intelligence, have a sip today
We owe it all to Joe
One potion, one ocean, one ruler of all

It's a vision I've seen
It's the world of your dreams
It's a pearl in the palm of your hand
And with the power of speech, it is all within reach
We can swim to the promised land

Promise us, Joe, you'll be our guiding light

Such an amazing guy

King of the coral, lord of the krill, the prince of the whales

Intelligence, say you'll lead the way
Intelligence, have a sip today
We owe it all to Joe
King of the coral, lord of the krill, the prince of the whales 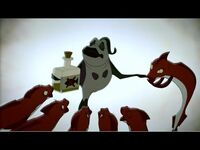 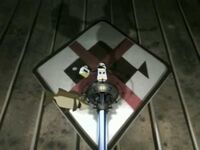