I F***ing Love Christmas is a song from Channel Awesome's Nostalgia Critic series, featured in the episode where the Nostalgia Critic reviews Grandma Got Run Over by a Reindeer. The Nostalgia Critic loves Christmas so much he goes insane, and decides to calm down and be more marketable by using a drugged "chill pill patch" to keep himself under control. However, when his assistant Tamara Chambers removes the patch and tells him he can celebrate Christmas however he wants, all of his pent-up excitement bursts out and he becomes the insane Christmas Spirit.

The song was performed by the Nostalgia Critic's actor, Doug Walker.

I'm full of Christmas semen, I don't know what that is but it's hot
It's like heaven's orgasm, inside an oatmeal cookie shot
And when I put my Santa hat on, it's a needle full of Christmas glee
Coating my house in frilly shit
And Disney trademark intellectual property

[Ladies and gentlemen, Jesus Christ on the electric guitar!]

I'll buy all things red and green
Accumulating thousands in debt
I'll let it ruin my life
Making it the best Christmas yet
And I'll play those Christmas carols until my ears will bleed with Christmas cheer
It'll scare the sh*t outta you, but it's only getting bigger every year!

And the feels, and the deals, and the meals, and the steals at the Sears
Keep it longer, make it stronger, nothing's wrong here, I could stay here all year
Smell the crazy, feeling hazy, something's tasty, at the Macy's downtown
Getting higher, feeling wired, I'm inspired, I'm on fire right now

I love the over marketing for making doubloons!
By the way this song's available on iTunes!

I wanna smash it open ‘til it's stiff and cold
And maybe search its brains for its Christmas gold
And then drink it's blood ‘til I lose control
And the Christmas madness will take it's toll!

I'll kill anyone not celebrating with me
Your resistance is feeding my insanity
Cause it's snowing
I love shopping
So put that star on top the tree
And buy me a f*cking TV
We're going on a shopping spree
My stockings filled with DVDs
I my heart is filling up with glee
Can't help what's is going over me
I fu-fu-fu-fu-f*cking love Christmas! 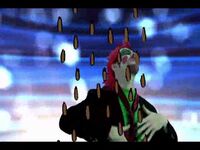 I F***ing Love Christmas (ft. Doug Walker)
Single
Add a photo to this gallery
Retrieved from "https://villainsong.fandom.com/wiki/I_F***ing_Love_Christmas?oldid=6107"
Community content is available under CC-BY-SA unless otherwise noted.