The Adventures of Ichabod and Mr. Toad

Cartoon Song
"Headless Horseman" is a song from Disney's 1949 animated film The Adventures of Ichabod and Mr. Toad, in the segment The Legend of Sleepy Hollow. It is sung by Brom Bones about the Headless Horseman.

It was performed by Brom Bones' voice actor, the late Bing Crosby, and a chorus as the other guests.

[Just gather 'round
And I'll elucidate
On what goes on outside when it gets late.
Long about midnight,
The ghosts and banshees,
They get together for their nightly jamborees.
There's things with horns and saucer eyes
Some with fangs about this size.]

[Oh, I'm telling you, brother,
It's a frightful sight
To see what goes on Halloween night.]

Oh when the spooks have a midnight jamboree,
They break it up with fiendish glee.
Ghosts are bad,
But the one that's cursed
Is the Headless Horseman,
He's the worst.

When he goes a-joggin
'Cross the land,
Holdin' a noggin',
In his hand,
Demons take one look and groan,
And hit the road for parts unknown.

And, there's no spook like the spook that's spurned.
They don't like him, and he's really burned.
He swears to the longest day he's dead,
He'll show them that he can get a head

They say he's tired of his flamin' top,
He's got a yen to make a swap.
So he rides one night each year,
To find a head in the Hollow here.

With a hip-hip and a clippety clop,
He's out looking for a top to chop.
So don't stop to figure out a plan,
You can't reason with a headless man.

[Now, if you doubt this tale is so,
I met that spook just a year ago.
Now, I didn't stop for a second look,
but made for the bridge that spans the brook.
For once you cross that bridge, my friends,]

The ghost is through, his power ends.

So, when you're riding home tonight,
Make for the bridge with all your might.
He'll be down in the Hollow there.
He needs your head.
Look out! Beware!

With a hip-hip and a clippety clop,
He's out looking for a head to swap.
So, don't try to figure out a plan,
You can't reason with a headless man! 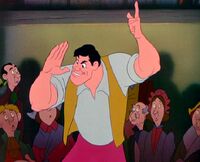 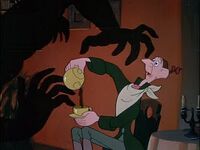 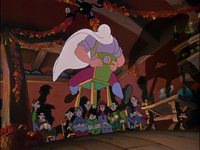 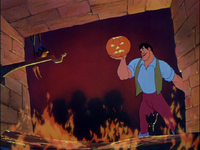 The Headless Horseman - Thurl Ravenscroft
Thurl Ravenscroft
Add a photo to this gallery
Retrieved from "https://villainsong.fandom.com/wiki/Headless_Horseman?oldid=28261"
Community content is available under CC-BY-SA unless otherwise noted.