"He's Eviler" is a song from the season one episode "The Monster of Phineas-n-Ferbenstein" of the Disney animated series Phineas and Ferb. It features Dr. Jekyll Doofenshmirtz, now more powerful and more evil, gloating about his power while on a rampage, although he just causes childish pranks rather than anything evil.

The song was performed by Doofenshmirtz's voice actor Dan Povenmire and a chorus as a trio of singers.

He's got a diabolical sense of fun
And an evil, evil plan
[Well not a plan so much]

'Cause he's eviler
[I'm winging it actually!]
More evil than he was before
[That's right!]
Yes he's eviler
[I don't think that's a word]
And he's taking it door to door
[Whoops, gotta go!] 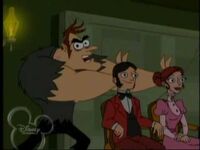 Phineas and Ferb - He's Eviler
Add a photo to this gallery
Retrieved from "https://villainsong.fandom.com/wiki/He%27s_Eviler?oldid=24568"
Community content is available under CC-BY-SA unless otherwise noted.