"Haman's Song" is a song from the 2000 animated short film VeggieTales: Esther: The Girl Who Became Queen. It features Haman (portrayed by Mr. Lunt) tricking King Xerxes (portrayed by Mr. Nebby K. Nezzer) in into believing that an evil family is out to get him, while in actuality Haman is trying to get his enemy Mordeci and his family banished.

The song was performed by Haman/Mr. Lunt and Xerxes/Mr. Nezzer's voice actor and series co-creator Phil Vischer, and a brief offstage chorus at the end.

Your Highness, I believe there is much to fear
(Oh, really? Those Peaonis are no longer here.)
A much greater danger may await you now
(How's that possible?)
With permission, Your Highness, I'll tell you how.

It's my duty to inform you, and if I'm correct,
To ignore this great emergency would be neglect,
It's the motto of my office, serve and protect,
There are those who walk among us who show no respect!

The law must be adjusted, there are those who can't be trusted

[Oh my goodness! Tell me about these people.]

A sneaky little family who do sneaky little things,
Who stick their sneaky noses into matters of the King.
I fear if they're not dealt with, the prospect makes me weep
A Zucchini-shaped sarcophagus is where you'll sleep!

Really? The nerve! I am disgusted!
There are those who can't be trusted!

[That sure doesn't sound like a nice family.]
[Nope.]

Your Highness, I believe we must act with speed
(Agreed! Say the word! I'll give you what you need!)
A simple solution, but you must act now
(Well, how can I help?)
With permission, your Highness, I'll tell you how.

After careful calculation, I've got just the thing
We'll send them to the dreaded Isle of Tickling
But before I can take action, we have to close the deal
And it needs the kingly imprint of your royal seal!

I agree! They must be busted!
There are those who can't be trusted!

That sneaky little family who do sneaky little things,
Who stick their sneaky noses into matters of the King
For crimes against the kingdom, their punishment is steep:
The Isle of Endless Tickling is where they'll sleep!

The law is now adjusted!
For those who can't be trusted

There are those who can't be trusted 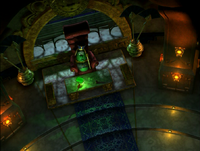 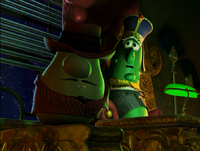 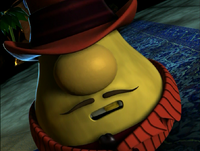 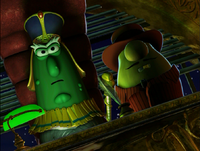 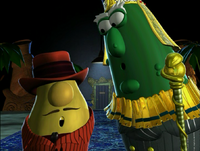 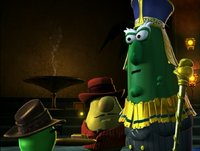 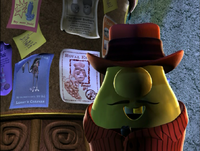 VeggieTales Haman's Song
Add a photo to this gallery
Retrieved from "https://villainsong.fandom.com/wiki/Haman%27s_Song_(VeggieTales)?oldid=26952"
Community content is available under CC-BY-SA unless otherwise noted.