Snow White and the Huntsman series

"Freya vs. Ravenna" is a rap battle from the internet series Princess Rap Battle created by internet music artist Whitney Avalon. It features a duel between the characters of Freya and Ravenna, with a small intervention of The Huntsman and Sara, all from the 2012 fantasy film Snow White and the Huntsman and its 2016 sequel The Huntsman: Winter's War.

It was performed by Whitney Avalon as Freya, Laura Marano as Ravenna, Derek Theler as The Huntsman and Jessica Bishop as Sara.

Look, it’s my psychopath sister who abandoned her sanity
Slept her way to the top, absorbing power from vanity
Hide yo’ kids and hide yo’ wives, my kin is creepin’ nearer
Like MJ she’s talking with the man in the mirror
You think you’re so slick but let me be Blunt
While you whisper in the shadows I just take what I want
My forces conquer kingdoms - it’s my law they instill
Love is forbidden, even Netflix and chill

Did you say something? Because it sounds like you’re riled
I guess you’re still bitter from the loss of your child
While you outlaw affection, check the reflection
I’m practically invincible since my resurrection
I’m a sucker for beauty, leaving permanent scars
You’re the second-place silver, I drop solid gold bars
I made you from nothing, now you make me embarrassed
You think that's not fair, but we know I'm the fairest

You’re a monster inside while I’m wittier and grittier
This battle is a cold war who cares who’s prettier?
Once you feel my frost bite, then you'll put up no fight
We remember that Ravenna
Lost to frickin’ Snow White

I’ll freeze you freakin’ solid and shatter your remains
Your crazy don’t faze me, I’ve got ice in my veins
I’m the mistress of cold, I’ve got that climate controlled
I can break her cause she’s faker than a ton of fool’s gold
I’m faster, cooler, calmer and I’m twice as nice, maybe
You'll get that cold shoulder from this ice ice baby
So fresh and so clean, I’ll put an end to your scheme
The winner is the winter and you’ll scream for this Ice Queen

You keep coming back for more like a cold sore
Always nipping at my heels, quoth Ravenna, Nevermore!
My beauty bewitches and no king is immune
He falls for me, we marry, and he dies on the honeymoon
Brutal beauty with brawn and when my body’s gone
My power lives forever in this phat brass gong
We share the same bloodline but you’re half as strong
You’re like the live-action version of Elsa minus the badass song
So let’s stop this charade and end this whole ice capade
The weakness in your heart’s the reason you were betrayed
Best sorceress since Circe - you’re just a beginner
Pathetic, beg for mercy, bow down to Ravenna

Ya’ start the fight without me? My presence is vital
Maybe they forgot you?
But my name’s in the title!
Wow, Hersworth and Hemsworth, your two favorite huntsmen
That bow-toting traitor brought her wack axe husband
Well, I never, miss!
Though now she’s my missus
The good queen? Please, you’re as bad as your sis is
You raised a child slave army!
You’ve got no room to judge
Let it go
Chill out, free your heart from this grudge
You kill all that oppose you without thinking twice
And you cannot solve your problems making walls of ice

That’s enough, children, this is a family matter
And I will be the champ for the rhymes I’m slinging at ‘er
Is that envy I detect when you’re dissin’ my name?
Don’t hate the Freya, hate the game

You were a lowly little pawn so check this switch up
I'm the reason you're a queen - don't make me smack a bishop
I start this and I end this, I’m the prequel and the sequel
You can’t have the final word cause I’ve got no equal 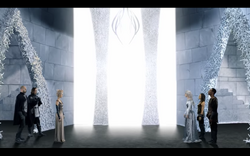