It's obvious I live a better life than you
What do you do?
Suck the soul out of anyone that dates you?
Look what I've done without a leash
I'm big on Sims 1 and Sims 3
I only drink socially; 40 years clean
I got a lot of Friends... DVDs
You live with the rents? I bought me a big ass house
It was haunted but the ghosts moved out
What'd you know about tiles? What'd you know about grout?
I'm a homeowner kid, take a time out
No don't, I got a confession to make
I'm only doing this gig for one thing
Not to win the battle, but to win your heart
To have and hold, 'til death do us part

Seriously? This is a joke
There's not even vacancy in the friend zone
You think you have a shot with me?
Ha! You haven't even been boned
And I already got a Soul, bitch, thanks to Kia
You got a one-night stand... At IKEA
Want likes and views? Get me in a pic
You're as popular as a stick
I don't spit or swallow, I save
You think I want you? I already got a slave
You make daily runs for Jergens and Vaseline
Carpal Tunnel in your wrist, dirty magazines
You smell like a fart, Bush's Beans
That dog would piss on your recipe
You're hideous and get laid less than Yoda
Here's a paper bag, your head looks like a scrotum

We could play freeze-tag in the park
And cook hot meals together
Lay down in our front yard
And gaze at the stars forever
Let's grow old together. Together forever
Tell our grandchildren stories as you suck on my lever
Cause if you're a stick, I'm a stick; let's start a fire
I put my condoms in the freezer so they never expire
It'll take a few hours to thaw out this frozen rubber
Don't you worry 'bout another girl except for my mother

What girl? The one you beat every time you clap?
Your head's a ballsack, your song was crap
Here's a sad fact, just do the math
See son, you've got 99 problems, and a bitch will never be one
Subtract friends, subtract family
Add a sad display of emotion
Times that by no girlfriend. Don't ya see?
Your answer will always come out to be hand lotion
Grandkids? There will be no fruit of your loins
You want head? Flip a coin
You want insurance? Move to Des Moines
If life was fair, you'd be destroyed
If this was Star Wars, you're forever a drone
Starbucks, forever a scone
What I'm saying is you're forever unknown
Now go to your chateau and die alone 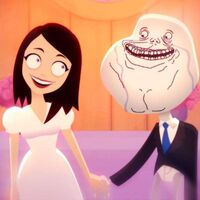 Retrieved from "https://villainsong.fandom.com/wiki/Forever_Alone_vs._Overly_Attached_Girlfriend?oldid=12630"
Community content is available under CC-BY-SA unless otherwise noted.