The "Fairy Godmother's Song" is a song from the 2004 DreamWorks animated film Shrek 2. It features the Fairy Godmother arriving to try and cheer up Fiona.

The song was performed by the Fairy Godmother's voice actress Jennifer Saunders.

I'll make you fancy, I'll make you great
The kind of gal a prince would date
They'll write your name on the bathroom wall
For happy ever after- give Fiona a call

A sporty carriage to ride in style. A sexy man-boy chauffeur Kyle
Vanish your blemishes, tooth decay cellulite thighs will fade away
A hool and a hey, have a Bichon Frise

Nip and tuck here and there, to land that prince with the perfect hair
Lipstick liners, shadow blush to get that prince with a sexy tush
Lucky day, hunk buffet
For the lipstick a roll in the hay
You can swoon on the moon with the prince to this tune

Don't be sad, you'll be fab
Your prince will have rock-hard abs
Cheese soufflé
Valentine's Day
Have some chicken fricassee 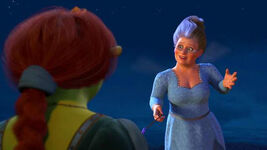 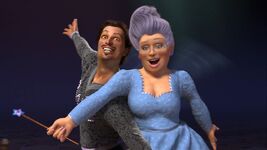 Retrieved from "https://villainsong.fandom.com/wiki/Fairy_Godmother%27s_Song?oldid=23219"
Community content is available under CC-BY-SA unless otherwise noted.