"Daffy's Rhapsody" is a 1950s song based off the animated Looney Tunes shorts. It features Daffy Duck singing about how the hunters won't leave him be while being chased by Elmer Fudd.

The song was performed by the late Mel Blanc as both Daffy and Elmer Fudd.

Greetings!
My name is Daffy,
There's no other duck like me,
Because I'm so daffy,
And the reason I'm daffy,
And so gosh-derned riff-raffy,
And so screwy and laffy,
Is because those hunters won't leave me alone.

Oh, why don't they hunt some other animal for a change?
So, that I won't have to end up on a kitchen range.
But no, duck hunting's all the rage and they won't let me be.
And I'm so full of bullets, I'm lit up like a Christmas tree.
There's so much I'd like to do if I just had the chance.
I'd like to play and romp and even sing and do a dance.

It's bang! bang! here, and bang! bang! there
Bullets flying everywhere
I can't stand it any longer
I get weak and they get stronger

There's no rest and there's no peace
Won't this shooting ever cease
Morning, noon, and through the night
That's why I look such a fright

Why don't they hunt big wild moose
Or chase a Reindeer on the loose
There's possums, chipmunks, caribou
Or rabbits for a rabbit stew
Raccoons, squirrels, porcupines
Monkeys swinging on the vines
Leopards with or without spots
Wild cats with or without dots
Elephants, badgers, kangaroos
Lions, tigers, cows that moo
Wolf and mice and prairie ox
Red and grey and silver fox

Daffy! They drive me daffy!
Those hunters with their great big guns
They're all uncles, cousins, fathers, sons
Crazy! They got me hazy
With all that rootin'-flootin'-hootin'-tootin'-high-falootin'-noisy shootin'
Closer! They're gettin' closer
With shot-guns, pistols, bows and arrows, riffles, knives, and other deadly trifles
Scram now! While I'm still able
You're nuts if you think that I'm gonna end up on somebody's dinner table

So, goodbye!
So long now! 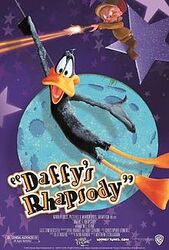 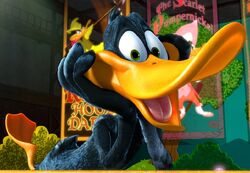