"Cutting Edge" is a song from Disney's 1987 animated feature film The Brave Little Toaster. It features an assortment of cruel Cutting-Edge Appliances as they sing about their superiority.

I can process words, accounting too
And my pixel screen displays for you
Computer graphics locked into
Your memory... memory...

You want to go to old Rio
De Janeiro, my dear?
You want to join in any Club
Paradise?
You'd really rather stay at home
Where the picture is clear
You get it on the stereo
And you don't even have to go

Hey, I can bake your biscuits too
Pop some dough boy out for you
I'm micro solid-state and that's
No static

We're the bytes and chips to call
You just have yourself a ball
It's all hyperactive on the edge
From LEDs to CRTs
Woofers, tweeters, antenna trees
An ultra-nylon life of ease
Everything you dreamed of on the edge
And more 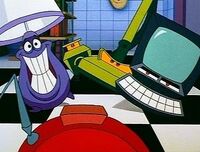 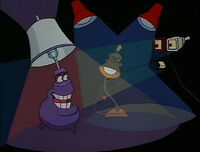 Retrieved from "https://villainsong.fandom.com/wiki/Cutting_Edge?oldid=17828"
Community content is available under CC-BY-SA unless otherwise noted.