The Chipmunks Go To The Movies

"Clothes Make The Man" is a song from the season eight (known as The Chipmunks Go To The Movies) episode "Chip Tracy" of the animated television series Alvin & the Chipmunks. It features the singer Breathmint Baloney (portrayed by Brittney Miller) also known as the criminal The Glove, performing at a club.

Don't you know it's clothes that make the man?
Ah, I always get so much bolder
When I feel the pads on your shoulder

Don't you know it's clothes that make the man?
Whether you're in silk or in suede
Leather, cotton, twill or brocade

Don't you know it's clothes that make the man? 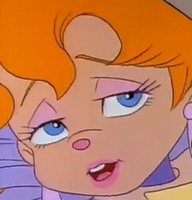 Retrieved from "https://villainsong.fandom.com/wiki/Clothes_Make_The_Man?oldid=22590"
Community content is available under CC-BY-SA unless otherwise noted.