The Nightmare Before Christmas: Oogie's Revenge

Well, well, well! Look what the bat dragged in!
Jack, you made it this far? Ooh, I'm really scared!

Oogie I'm here to finish this once and for all!

I hope you did amuse yourself, with THIS your little fling.
You'd better pay attention now cause I'm the pumpkin king!

You think you are winning. But that's a lot of noise!
Just to be a sport, dear jack, I'll share my Oogie toys!

The leaders of the holidays must right now be set free! release them all at once or you will have to deal with me!

You beat my men. So what? big deal! You even ran the maze! You still can't stop me, I'm the king of seven holidays!

I'm the only pumpkin king! 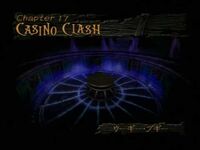 Retrieved from "https://villainsong.fandom.com/wiki/Casino_Clash?oldid=28085"
Community content is available under CC-BY-SA unless otherwise noted.