Blood in the Water

Blood in the Water

"Blood in the Water" from the musical Legally Blonde, based on the film of the same name. It features Professor Callahan teaching his class to be lawyers.

Now when you choose a law career
The moment you embark
There is that joke you're bound to hear
"A lawyer is a shark"
Ignore that, it's simplistic and it's dumb
Only some of you will turn out sharks, just some
The rest... are chum

Mr Schultz, hypothetical question
Would you be willing to defend the following banker accused of fraud?

No, I would not want to take that case

Wrong!
This one is a win unless you're lazy
Grandma's broke, she'll have some hack from legal aid
Put her on the stand and call her old and crazy
Your guy goes free and he can get you high and laid

Ms Hoopes, hypothetical question
Would you be the right lawyer for the following client?

What, you think I wouldn't defend him
Just because he's a typical man?

Oh, you lesbians think you're so tough

Oh dear, I fear my comment has offended
Hard to argue, though, when you're too mad to speak
Your employment will be very quickly ended
When they see how your emotions make you weak

So what's my point?
I run a billion-dollar law firm
And I hire four new interns every year
From this class, I will select
Four young sharks whom I respect
And those four will have a guaranteed career
Do you follow me?

So I wanna see, what?

Exactly
Let the games begin
Four of you will win
But just those four with a dorsal fin
Yes, blood in the water
So bite and scratch and claw

[Someone's had their morning coffee
Would you summarise the case of State of Indiana v Hearn from your reading, please?]

[Oh... I wanted to answer the puppy question?]

[But I'm asking you about the assigned reading]

[Okay, who assigns reading for the first day of class?]

[You have guts, Ms. Woods...
Ms. Kensington?
Let us say you teach a class at Harvard Law School
A position that you're justly proud about
But a girl on whom you call hasn't read the case at all
Should you let it go or-]

Alright then
You heard your classmate
You have just been killed
She cut your throat so grab your coat
Yes, you've got guts

But now they're spilled
Your blood's in the water

So would you please withdraw
And if you return be ready to learn
Or is that unfair? Oh, wait I don't care!
That's just how I rule In life and in school
With fear and shock and awe

The thrill of the kill

Becomes your only law 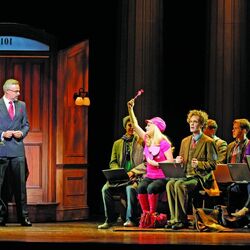 Legally Blonde Blood in the Water
Add a photo to this gallery
Retrieved from "https://villainsong.fandom.com/wiki/Blood_in_the_Water?oldid=24411"
Community content is available under CC-BY-SA unless otherwise noted.