Something to Sneeze At (album)
Harry Potter franchise

"Avada Kedavra" is a fan song for the Harry Potter book and film franchise, and a parody of the song "Hakuna Matata" from Disney's 1994 film The Lion King, performed by musical group Nuclear Bubble Wrap featuring artist Steve Goodie. It features Lord Voldemort and Peter "Wormtail" Pettigrew as they introduce Draco Malfoy to the Killing Curse and instruct him to kill Dumbledore.

[Draco, at times like this, we Death Eaters say: "You must get Lord Voldemort's behind."]

[Amateur. It's “Get behind Lord Voldemort.” Draco, a bad thing needs to happen, and it’s up to you.]

[That’s not what they teach us at Hogwarts.]

[Then maybe you need a new lesson!]

[Yeah. It's our favorite hex!]

[Geez kid, what the hex wrong with you? Ha ha ha!]

[Ha ha ha! Good one, my lord. Draco, those two words will solve all your problems.]

When I was a young Hogwarts... student...

He found his persona lacked a certain appeal
He was teased and abused, 'til he squirmed and he squealed...

I'm a sensitive soul, and I was so chagrined,
that they put me in Gryffindor, and not Slytherin!
And oh, the shame!

Such a lame nickname!

It means no Harry, he’ll go straight to the grave.

It's our recipe...
For anarchy...
Avada Kedavra!

[Welcome to the dark side.]

[We kill whoever we want.]

[That Order of the Phoenix makes me so mad!]

[I’m so angry I could kill a house-elf.]

[No, he’s mine! Listen, if you’re going be a Death Eater, you have to act like a Death Eater. And there’s one fella that really needs to... go away.]

[A certain headmaster... who did you think?]

[This is a rare opportunity.]

[I’m tellin’ you kid, this is the great life. No rules, no accountability... Ooh! The little muggle kind. And best of all... we’re all pureblood!]

It means no Wormy, and Dumbledore’s in his grave.

Love to hear them scream, in that flash of green...

[ Be prepared... can you feel the death tonight?] 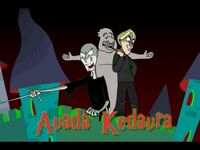 Nuclear Bubble Wrap - Avada Kedavra
Add a photo to this gallery
Retrieved from "https://villainsong.fandom.com/wiki/Avada_Kedavra?oldid=21635"
Community content is available under CC-BY-SA unless otherwise noted.