"Aaron Burr, Sir" is a song from from the Broadway musical Hamilton. It serves as the introductory number for the titular character meeting Alexander Hamilton before being interrupted by John Laurens, Marquis de Lafayette, and Hercules Mulligan.

That depends, who's asking?

Oh, sure, sir
I'm Alexander Hamilton, I'm at your service, sir
I have been looking for you

Sir, I heard your name at Princeton
I was seeking an accelerated course of study
When I got sort of out of sorts with a buddy of yours
I may have punched him it's a blur, sir
He handles the financials?

You punched the bursar?

Yes, I wanted to do what you did
Graduate in two, then join the revolution he looked at me like I was stupid I'm not stupid

It was my parent's dying wish before they passed

You're an orphan, of course I'm an orphan
God, I wish there was a war
Then we could prove that we're worth more than anyone bargained for

Can I buy you a drink?
That would be nice

While we're talking, let me offer you some free advice
Talk less

You can't be serious

You wanna get ahead?

Fools who run their mouths off wind up dead

Yo yo yo yo yo
What time is it?

Show time, show time
Yo, I'm John Lauren's in the place to be
Two pints o' Sam Adams, but I'm workin' on three, uh
Those redcoats don't want it with me
'Cause I will pop chick-a pop these cops till I'm free

Oui oui, mon ami, je m'appelle Lafayette
The Lancelot of the revolutionary set
I came from afar just to say bonsoir
Tell the king casse-toi
Who's the best, c'est moi

Brrrah, brraaah I am Hercules Mulligan
Up in it, lovin' it, yes I heard ya mother said come again

Ay, lock up ya daughters and horses, of course
It's hard to have intercourse over four sets of corsets (wow)

No more sex, pour me another brew, son
Let's raise a couple more to the revolution

Well, if it ain't the prodigy of Princeton college

Give us a verse, drop some knowledge

Good luck with that, you're takin' a stand
You spit, I'm 'a sit
We'll see where we land (boo)

Burr, the revolution's imminent, what do you stall for?

If you stand for nothing Burr, what'll you fall for? 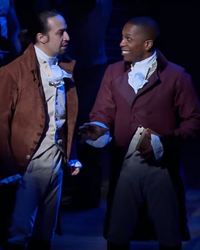 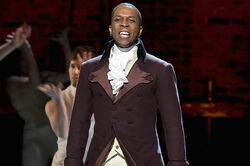 Aaron Burr, Sir (Instrumental)
Instrumental
Add a photo to this gallery
Retrieved from "https://villainsong.fandom.com/wiki/Aaron_Burr,_Sir?oldid=21866"
Community content is available under CC-BY-SA unless otherwise noted.