A Meticulous Analysis of History

A Meticulous Analysis of History

Pinky and the Brain

"A Meticulous Analysis of History" is a song from the cartoon series Pinky and the Brain. The song is used by Brain to explain how through studying history he plans to learn where other conquerors failed in hopes of eventually taking over the world with Pinky often making jokes about the warlords of the past.

It is sung by Brain and Pinky's voice actors Maurice LaMarche and Rob Paulsen, respectively; the melody is taken from the song "When I Was A Lad", written by W. S. Gilbert and Arthur Sullivan for their comic opera HMS Pinafore; or, The Lass That Loved A Sailor.

Through meticulous analysis of history
I will find a way to make the people worship me.
By studying the conquerors of days gone by,
I'll discover the mistakes that made them go awry.
So that you can make the same mistakes if you just try.
By studying the past so carefully,
I won't repeat the same mistakes of history.
You'll never make another mistake, you see,
'cause you'll fall asleep from reading all that history.

When Cleopatra reigned as Queen,
With Roman leaders she was often seen.
But when she had no ruling friend,
She found a poison snake to bite her in the end.
A bite down there I really wouldn't recommend.


I won't need world alliances,
When I'm commanding everyone's appliances.
Oh no Brain, that would really smart,
To be bitten on the bottom by a Cuisinart.

Hannibal, our book confirms
Tried conquering Italy with pachyderms
Just why he failed, nobody tells
But he never could get past the Roman sentinels
And he couldn't find his weapons in the peanut shells
An elephant is not required
If I can use the media to be admired
The TV viewers you'll delight
Unless the network puts your show on Sunday night

Attila was a mighty Hun
He ransacked Asia Minor just for fun
But when he got to Europe's banks
He was routed by an army of heroic Franks
I like mine with sauerkraut and mustard, thanks
Why pillage like a criminal
When I can send out messages subliminal
Please send a message to that Hun
To see if he can pillage me a hot dog bun
[whack] Zort!

Caligula was no boy scout
He did things that we can't even talk about
The Romans knew he'd lost his head
When he filled a vacant Senate seat with Mr. Ed
What's wrong with being friendly with a thoroughbred?
Why rule like such a reprobate
When I can put the world in a hypnotic state
When everybody's in a trance
You can make the people do a chicken dance

Pinky, if you don't stop this foolishness
I shall have to hurt you
'kay.

In France, Napoleon Buonaparte
Thought beating Austria was very smart
But when he took on England too
He was beaten up by Wellington at Waterloo
And now he's just a pastry filled with creamy goo
Why conquer with depravity
I'll win the world by undermining gravity
And even if your plan falls through
Maybe they will name a pastry after you
[squirt] Waahahaha!

From Genghis Khan to Charlemagne
From Alexander down to Tamburlaine
I find a ruler's tragic flaw
And gain a little wisdom out of each faux pas.
Don't forget the former Governor of Arkansas
That concludes my little rhyme
I hope this lesson wasn't just a waste of time
Well Brain, I've learned that one thing's true
Every one of them has failed, and so have you

[Brain: Thank you for that vote of confidence.
Now come, we must prepare for tomorrow night.

Pinky:Why, what are we going to do tomorrow night?
(Gasp) Sing a song about all the world's cheeses?

Brain:No, Pinky, we shall try to take over the world—
Through meticulous analysis of history.] 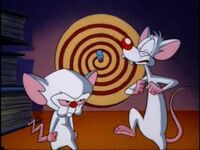 A Meticulous Analysis of History
Add a photo to this gallery
Retrieved from "https://villainsong.fandom.com/wiki/A_Meticulous_Analysis_of_History?oldid=10843"
Community content is available under CC-BY-SA unless otherwise noted.